JavaScript Tools - what is new in Neon.1?

In this article we are happy to introduce new features and improvements that have been implemented as part of the JSDT project and now available in the Neon.1 release:

Overall, 41 bugzillas have been resolved during the Neon.1 development cycle (some of the bugs have been waiting to be fixed for more than 5 years!) Also, we would like to shed some light on our plans for the Neon.2 release.

Want to contribute to JSDT project but do not know how? Think that environment setup is too difficult and comprehensive? Now you can easily setup JSDT using Oomph within a few minutes! Here is a short demo video which explains how to do it:

Node.js support was originally implemented as part of the Eclipse Neon release. In Neon.1 debugger facilities have been significantly improved. Previously in order to change the code during the debug session one should have saved the JavaScript file, right click on it → V8 Debugging → Push Source Changes to VM. Now saving the file is just enough - new changes will be applied automatically:

Also, there are a few important bug fixes that improve the debugging experience:

There is also a possibility of debugging JavaScript for applications running on servers using Chrome / Chromium Debugger menu item:

All npm scripts defined in the package.json can be now executed via Run As.. → npm Script context menu:

The output of the script command will be reflected in the "Console" view:

In the next release we are going to switch to the Closure compiler which is more tolerant and has better performance in comparison with currently used Esprima parser. Moreover, we are going to return broken JavaScript search facilities back to JSDT. Actually, most of the work in the search direction is already done:

Other plans are coupled with polishing Node.js / JavaScript debuggers and making the whole feature set smooth, stable and complete. If you want to have some particular bug fixed in Neon.2, please, speak up on the wtp-dev mailing list or let us know on twitter, youtube, stackoverflow etc.

Thank you to the contributors who made the Neon.1 release happen:

We would like to express special gratitude to the community for their feedback! We look forward to hearing your comments, remarks and proposals about new Neon.1 release.
Have fun!

Bower is a front-end package manager which works by fetching and installing frameworks, libraries, assets. It offers a generic, unopinionated solution to the problem of front-end package management, while exposing the package dependency model via an API that can be consumed by a more opinionated build stack. Bower provides declarative dependency management (dependencies are declared and tracked in a manifest file, bower.json).

JBoss Bower Tools fall back on native Node.js and Bower calls. Hence, the following software must be pre-installed:

And then of course latest build of JBoss Tools for Mars.

For now only init and update commands of Bower API are supported. In order to initialize Bower one need to select File → New…​ → Other…​ and choose "Bower Init" wizard: This wizard helps to create bower.json file depending on set of preferences: After pressing "Finish" button bower.json will be created under specified directory: In order to add new dependencies one need to specify them in bower.json: 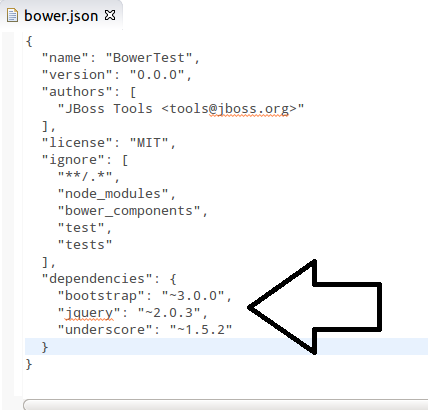 For updating dependencies user should right-click on the bower.json → Run As…​ → Bower Update "Bower Update" launch shortcut makes a native call which will install required packages or update them to the newest version according to bower.json:

Specified packages will be created under bower_components folder after "Bower Update" execution: 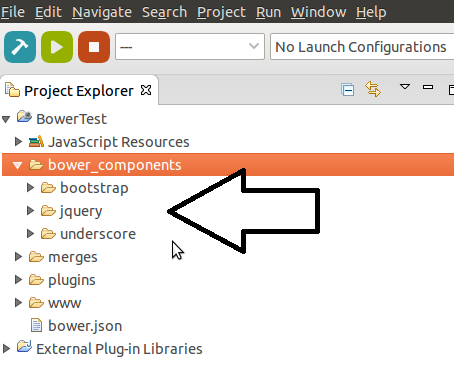 Basically, that is all - one can now use those packages for future front-end development.

Here is a short demo video which describes a basic use case of JBoss Bower Tools:

Bower support will be available in 4.3.0.Beta2 release and above. You can also use our nightly update site in order to try Bower Tools (JBoss Tools JavaScript Tools category) before the official release:

We are trying our best to make our tools as good as possible. User feedback is what we are seeking for now. We look forward to hearing your comments, remarks and proposals.
Have fun!

JavaScript is extremely popular nowadays and the fact Eclipse JavaScript Development Tools supports JavaScript ECMA3 standard only didn’t let us sleep well, so we decided to do something about it.

First we got to work and fixed tons of issues in Eclipse JavaScript Development Tools to make it usable, then when it esd good enough we extended it with some good features to make it even better.

Tern.java is now working behind the scene to provide JavaScript code analysis and content assist. Good news there is no need to configure it manually. Just install Tern.java Adapter from JBoss Tools update site and it configures projects with JavaScript facet automatically to unleash all Tern IDE features for you.

You can also get content assist for many popular JavaScript Libraries through Tern Modules. Manual configuration is required in Project Preferences. 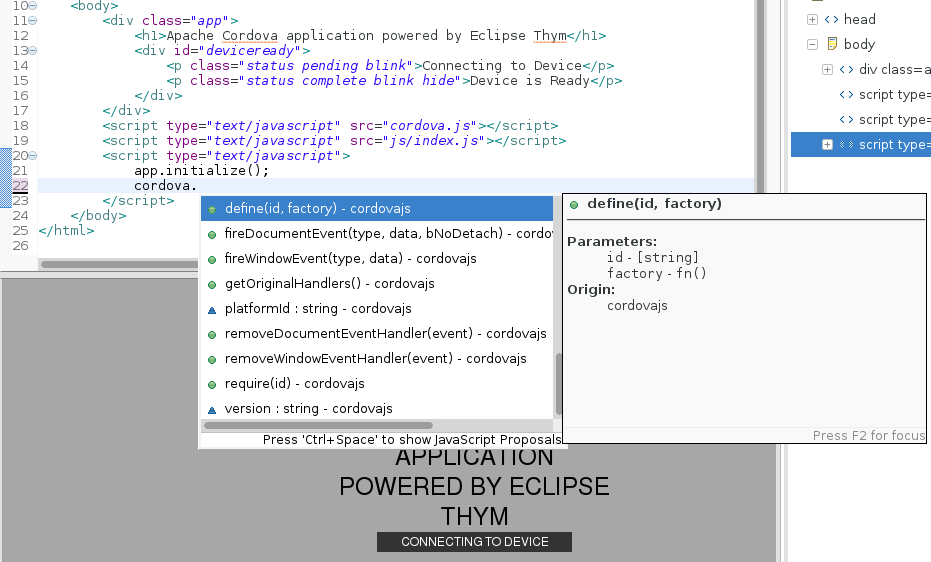