The Integration Stack for JBoss Tools Developer Studio is a set of plugins for Eclipse that provides integration tooling for the following frameworks.

Updates have been made to the Business Process tooling, Fuse Tooling, Data Virtualization and SwitchYard. See the Integration Stack 8.0.2 Release Notes

Don’t miss the Features tab for up to date information on your favorite Integration Stack components. 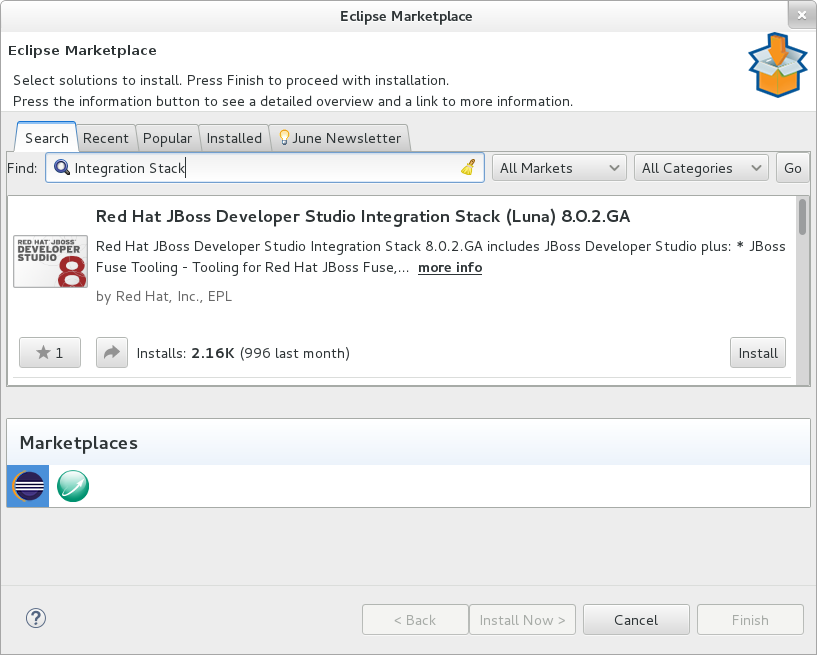 Screencast of Docker Tooling for Eclipse

Last week at DevNation I had the chance to show some of the cool features that we provide in JBoss Developer Studio, including the Docker tooling that we’ve built for Eclipse Mars and that was released last week[1].

I also recorded a screencast that highlights some of those Docker tooling features. The video shows how to:

I commented all the tasks as I recorded this screencast to highlight the important steps. Beware that if you run 'boot2docker', you’ll need to use a specific IP address instead of 'localhost' when creating the Server adapter in Eclipse (trust me, I made this mistake before…​)..

The dockerfile and its associated resources (module.xml, standalone.xml and JDBC driver) used during the demo is available on GitHub, so feel free to clone the repo and play with it ;-)

Keep in mind that some wizards showed in this screencast may be refactored in the near future, as we target Eclipse Mars SR1 at the end of September for a more complete version of the Docker tooling.

Feel free to discuss features and report bugs with us on the Docker component of Linux Tools at Eclipse.org. As usual, feedback is welcome!

1 Docker tooling is part of Developer Studio since version 9.0.0.Beta1 and JBoss Tools users can install it from Eclipse Marketplace or from our Update site
Looking for older posts ? See the Archived entries.