Fun stats about WildFly and Luna

In our recent milestone releases of JBoss Tools 4.2 we’ve started gathering additional data from those who are have agreed sending back anonymous usage data to us (Thank you!).

Reminder: As always, this is my personal interpretation of the data and again it is early days for the data collection. These numbers are just for the last month of beta testers thus do take these absolute numbers with a grain of salt!

In any case I find the numbers interesting and thought I would share since there are some lessons to be learned.

One of the data points are which JBoss servers users create. 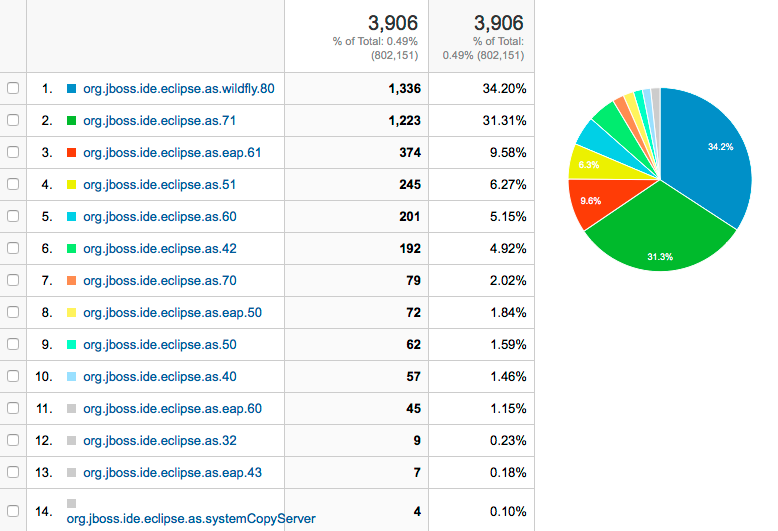 The numbers above shows the last two weeks of server creation by our beta users. Not surprisingly majority of users are using the community version of the latest JBoss servers (AS 7.1 and WildFly 8), and it’s great to see the third most used server is the free for development/enterprise supported EAP 6.1/6.2/6.3.

What I find funny is that there are still users using the latest/greatest development tools, but who runs JBoss AS 3.2 - this was last released back in 2006! Talk about dedication :)

What the list shows to me is the importance of development tools need to support multiple versions because even though most are using latest/greatest runtime there are still a great bunch of users that will be using older versions of runtimes. Many developers tend to forget or blissfully ignore this.

I’m convinced as users move to our release that gathers these data we will start see even higher numbers of "older" runtime usage.

What is a bit disconcerting is how few seem to know about our Deploy only server (in this list noted as systemCopyServer ). This server allows you to use Eclipse’s support for incremental deployments to any directory locally or remotely available. Really useful for deploying to a non-JBoss server, a remote PHP or just a plain html app.

You should try it out!

Combine this with our LiveReload support and you get a great and fast workflow!

Another data item we have insight to is the uptake of Eclipse versions.

The graph above is our recorded startups of Eclipse Java EE installs since January pr. week. Be aware the versions listed are the EPP versions, not Eclipse release train versions - I’ll do the mapping for you below.

Two things to note: the "Drop" at the end is just the effect of the numbers ending middle of the month, the "Dip" in mid April I’m not sure what is but we see it across all our Google analytics thus I expect it was an Google Analytics anomoly. The numbers have since stabilized, that said…​lets interpret!

This graph shows how Eclipse Kepler SR1 release (2.0.1) usage is dropping as users upgrade to Kepler SR2 release (2.0.2) - this are most likely the effect of users using Eclipse built-in update mechanism to upgrade.

What also can be seen is that the latest stable release (4.4.0) uptake is gaining faster than total Eclipse version usage (the faint lines are even older eclipse versions). Meaning total usage of JBoss Tools is up/stable. Eclipse isn’t dead yet :)

I wish Google Analytics had a way to show this graph cumulative instead of per line…​anyone up for a data extraction and visualization project ? I’ll give you access to the data to play with.

Finally, my personal main interest was to see what the uptake of Eclipse Luna is.

You can see what effect a GA release of Eclipse has. The red line is Eclipse Luna going from a couple of hundreds starts to now 7.000 starts pr. week since its release - but do notice that there is no corresponding drop (yet) in Kepler. Looks like most are installing Luna next to their Kepler installs (my theory at least ;)

This mimicks previous years uptake patterns and once everyone gets back from vacation and Luna SR1 release comes out it should be close to the level of Eclipse Kepler installs. Good to see users continue to picking up latest greatest features and bugfixes!

I’ll go look at the numbers again in a few months to see if the trend continues.

If there is some additonal data you are interested or questions about the above let me know in comments and I’ll try include/answer it!

Development of Hybrid Mobile Tools has moved to Eclipse Foundation

Even back when the first line of code was dropped for Hybrid Mobile tooling, making the tools as part of the Eclipse foundation was a goal. When starting, we looked at the available tools for developing Cordova applications. We found out that there were no open source solutions that we could contribute and use as part of our tools. Furthermore, interoperability among what very little existed was poor. Of course, our main goal is creating good tools for Apache Cordova development, but while doing that we always keep an eye on interoperability and extendibility.

It is only natural that we are moving the development of our tools for Cordova based application development and forming the Eclipse THyM project. We hope that, as a vendor neutral non-profit organization, Eclipse foundation will encourage contributions and be the base for interoperable Cordova tooling.

Everything related to Cordova based development including the project management, plugin discovery, and support for iOS and Android excluding the Cordova simulator is contributed to Eclipse.org. We have excluded CordovaSim for now because of its complex set of dependencies

The development will continue to happen on GitHub but on a repository owned by Eclipse foundation. The contributed code is already renamed, cleaned and on the new repository. If you are a contributor, or want to be one, please use https://github.com/eclipse/thym

We will use bugzilla, and thym-dev mailing list from now on as provided by Eclipse foundation. As expected project documentation is at the wiki. The builds will be running on eclipse.org build server instance.

What is NOT changing

JBoss tools will continue to have support for Cordova development. We will consume Thym project and extend them with more capabilities and integrate with other parts of the tools and technologies coming from projects such as Aerogear.

And of course our wish to create good tools for Apache Cordova development continues with a hope for better collaboration with other individuals and companies.